Saying it “just couldn’t choose a favorite,” the U.S. General Services Administration has picked all the major green rating systems to certify its buildings. 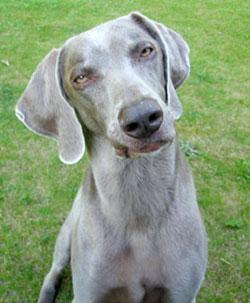 This adorable hound, dubbed Olive Green by her handlers, is the very first Weimaraner hired to sniff out unsustainable features in federal buildings. She has specialized training in finding both air leakage and halogenated flame retardants.

Following a years-long process of deliberation, debate, committee meetings, public comments, and eeny, meeny, miny, moe, the GSA has adopted the LEED rating system, Green Globes, and the Living Building Challenge as the standards by which federal buildings will be judged. Just in case those measures fall short, projects will also be subject to a “sniff test” by a qualified Weimaraner.

Despite the obvious duplication of effort entailed by the move, congressional Republicans who had been critical of LEED and GSA praised the decision. Senator Rand Paul of Kentucky called it “government gridlock at its best.”

He said, “With all those standards to meet, the government will have to halt its building programs. It will grind to a full stop all on its own. That’s when we’ll choke off the remaining air supply.” It was not immediately clear if the senator’s comment referred to energy-saving measures for reducing make-up air provided in the ventilation standard ASHRAE 62.1 or to his libertarian philosophy of radically shrinking the size of government, famously articulated by Grover Norquist as “reducing it to the size where I can drag it into the bathroom and drown it in the bathtub.”

In response, Green Building Initiative (GBI) president Jerry Yudelson trumpeted the decision as a victory for Green Globes, which he predicted would soon eclipse its competition. The green building marketplace needs competing standards, noted Yudelson, and “Green Globes will eventually be all of them.”

Jason McLennan, founder of the uncompromisingly strict Living Building Challenge, was also surprisingly pleased with GSA, noting that the rating systems would just have to “all get along.” The organizations have had their differences, he said, “but it’s time to come together, right now, over me.”

At USGBC, Brendan Owens, vice president for LEED technical development, said, “Is this what we wanted? Is this good for the industry? Is this a third rhetorical question in a row? I think it’s up to the green building community to decide.”

Meanwhile, the American Kennel Club issued a statement criticizing GSA’s “lack of consensus process” in selecting Weimaraners only, calling for a new public comment period to establish “guiding principles” for choosing additional breeds. The National Weimaraner Association, for its part, touted Weimaraners’ “leadership” in hunting, tracking, pointing, and retrieving both on land and in the water.

GSA’s press office was unable to schedule an interview with EBN to discuss its decision, citing its policy to not return emails after 7 a.m. or before 6 a.m., except on alternate Wednesdays.