It’s a win-win for winners, says Rick Fedrizzi, of the LEED Effort certification—an answer to concerns about v4’s excessive rigor.

First it delayed mandatory registration under LEED version 4 (LEED v4). Now the U.S. Green Building Council (USGBC) has announced a new program that should further appease concerns about what some have called the “excessive rigor” of the new rating system. The program, which effectively adds a fifth level of certification below LEED Certified, called Effort, will go into effect this fall when the option to register projects under LEED 2009 expires.

The LEED Effort Plaque will “finally answer the market’s loud-and-clear demand for ‘LEED-equivalent’ buildings, without any need to actually achieve LEED equivalence,” enthused Tarquinia Sal, AIA, project manager of a LEED Effort pilot project—a new corporate headquarters for the American Coalition for Clean Coal Electricity (ACCCE). “We had been almost afraid to bring up LEED with the owner. But with Effort, we were actually really excited to talk about it. We even convinced them to try for net-clean energy, and they are producing all their own energy right there on the site.”

“A lot of people are deeply concerned about their ability to ‘sell’ owners on the more stringent energy, IAQ [indoor air quality], and material requirements of v4,” concedes Scot Horst, chief product officer at USGBC. “This is our message to you: we have heard you badmouthing us for the last five years. And although your persistent, entitled, and short-sighted demand for a watered-down standard makes us very, very, very sad, we still like you.”

How to get certified

Although designed to integrate with other levels of LEED certification, the LEED Effort add-on is “a little bit its own animal,” according to Horst.

BuildingGreen spoke with Peter Crowe, LEED consultant for ZüperMällZ, developer of a Dallas mega-mall that is piloting the LEED Effort program. Crowe highlighted a variety of features he said his team has “really appreciated” so far:

There are still some kinks to work out, both Sal and Crowe related to BuildingGreen.

Crowe criticized what he called “a really narrow range of options,” for example, when his team was offered the choice of either lunch at Hardee’s or a trip to the Dairy Queen with USGBC founder and CEO Rick Fedrizzi. “I really felt that Chuck E. Cheese should have been at least mentioned,” Crowe opined. “Also, wouldn’t it be cool if little mini-plaque pendants on ribbons could be handed out to the whole project team at the event? I’m still disappointed that nothing like that came up, but we’re working with USGBC on that for next time.”

Sal had other critiques. As soon as a project is registered, for example, the team has the ability to connect with a LEED reviewer. Although she said customer service was “definitely on the upswing,” Sal felt this part of the program could use some improvement.

“When someone offers me handholding, I’m not expecting that to be figurative,” she said. “It would be nice, for my next project, to have the option of an actual reviewer to hold my actual hand.” She added that it would be “ideal” if the reviewer could do this “while literally bending over backwards.”

Although reaction to the LEED Effort program was generally positive among architects and green building consultants that BuildingGreen polled, not everyone is satisfied with the move.

The Green Building Initiative (GBI), developer of the rival certification system Green Globes, says it plans to file an antitrust complaint with the U.S. Federal Trade Commission. A GBI spokesperson told BuildingGreen the board is also considering a lawsuit for trademark infringement based on USGBC’s use of the term “LEED Equivalent” in its marketing of the LEED Effort program—a phrase the spokesperson says Green Globes laid claim to “under common law” as early as 2004.

Thanks for the laughs 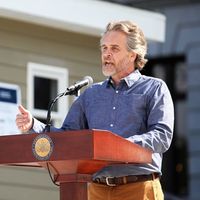 Appreciate the belly laughs this morning. Ya had me going for the first paragraph.

Who says tree-huggers have no sense of humor.

Forgot how funny you guys can be.  Best day of the year for sure. Not to be missed. Thanks!