It may take hundreds or thousands of years to return to pre-industrial-age levels of atmospheric carbon dioxide, but the loss of animal and plant species that is occurring today is, practically speaking, irreversible. It will take millions of years for evolution to fill the ecological niches being vacated by extinctions and restore healthy ecological balance.

A 2020 report published in the Proceedings of the National Academy of Sciences by Gerardo Ceballos, Paul Ehrlich, and Peter Raven, Vertebrates on the Brink as Indicators of Biological Annihilation and the Sixth Mass Extinction, brings the significance of species extinctions and loss of biodiversity into focus. Ehrlich is quoted in an article in The Guardian about the report as saying that “the conservation of endangered species should be elevated to a global emergency for governments and institutions, equal to the climate disruption to which it is linked.”

“We can’t lose [biodiversity] and still continue on this planet,” says Douglas Tallamy, Ph.D., an entomologist who has written several books about the importance of native landscapes to the food web. “The really sad part is that nobody knows that. We think we’re separate from nature, but nature produces the life support systems that keep us around.”

This report explores what architects, landscape architects, and developers can do to support biodiversity and explains why supporting native plants has become one of the greatest tools in the arsenal.

Buy Native Landscaping for Biodiversity for $39 » 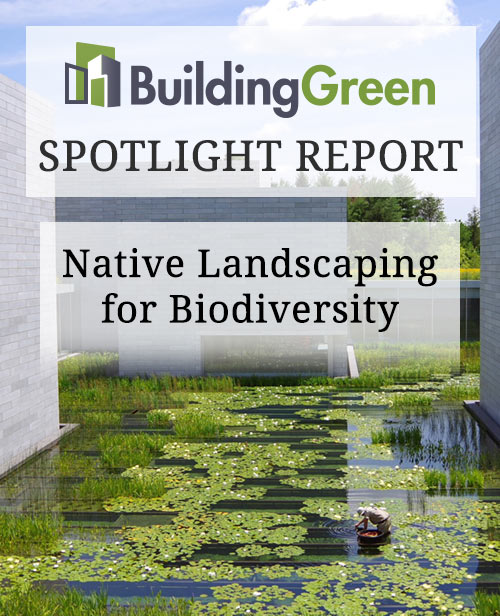 Buy it now for $39
If you’re already a BuildingGreen Premium member, log in now to get the report for free.