Can This Man Reinvent Concrete?

A California company, Blue Planet, is reinventing concrete and envisions a world in which the 8 billion tons of concrete used each year sequester billions of tons of carbon dioxide.

Pouring the foundation for our Dummerston Home; someday soon, concrete may be able to sequester huge quantities of carbon.Photo Credit: Alex Wilson

I’ve been in the San Francisco Bay Area for the past week speaking at various conferences. (When I travel I try to combine activities to assuage my guilt at burning all the fuel and emitting all that carbon dioxide to get there. Between conferences, I’m now spending time with my daughter in Petaluma and Napa.)

I spent three days last week at BuildWell, a small conference organized by my friend and colleague Bruce King, P.E. that is focused on “innovative materials for a greener planet.” The roster of presenters included such well-known thought leaders as Ed Mazria, FAIA of Architecture 2030, who is leading an effort to shift to zero-carbon buildings by 2030; John Warner, Ph.D., the father of Green Chemistry, which is transforming manufacturing by reducing toxicity; and Mathis Wackernagel, the founder of the Global Footprint Network.

A less-recognized presenter (and attendee throughout the three days) was Brent Constantz, Ph.D., the founder and CEO of Blue Planet and a professor at Stanford University. (Blue Planet has no website currently.) Little did I know how audacious Constantz’s plans are: to reinvent concrete, transforming it from one of the world’s largest emitters of carbon dioxide into one of the most important tools to sequester the carbon dioxide emitted from power plants.

Portland cement derives its name from its similarity in appearance to Portland stone, found on the Isle of Portland in Dorset, England in the early 19th century.

The primary raw material going into Portland cement manufacture is calcium oxide (CaO), which is produced by “calcining” limestone (CaCO3), under very high temperature and the intermediate formation of “clinker.” This calcining process drives off carbon dioxide (CO2). Because such huge quantities of cement are used globally about 1.6 billion tons), Portland cement production is one of the largest sources of our carbon dioxide emissions.

Portland cement produces CO2 both from the calcining of limestone (a chemical process) and from the tremendous energy inputs used in that calcining process.

Note that Portland cement is only one constituent in concrete, accounting for about 12% of the mass of concrete—the rest is from sand, water, and aggregate. It is the binder that glues the sand and aggregate together into a solid stone-like material.

(Read more in our special report on What You Need to Know About Concrete and Green Building.)

Blue Planet, which has attracted some large investors, believes that concrete produced with its CarbonMix cement and limestone aggregate would be carbon-neutral or even carbon-negative, meaning that the more of it you use the more carbon is sequestered—or pulled out of the atmosphere and forever locked up.

Blue Planet is carrying out research at one of California’s largest power plants: a natural-gas-fired plant on the coast at Moss Landing (south of San Francisco). The Moss Landing power plant, now owned by Dynegy, power plant produces four million tons of CO2 per year—CO2 that is contributing to global warming.

In producing concrete from CarbonMix cement, carbon emission reductions would be achieved in multiple ways: the production of Portland cement would be reduced; CO2 would be chemically tied up in the calcium carbonate cement; and the aggregate (a far larger constituent of concrete) would be limestone.

Using limestone as aggregate could be done immediately, with no changes in highway standards and concrete engineering standards. And Constantz claims that even the non-Portland cement could be used with very few changes—though the lower alkalinity in cement binder may mean that different re-bar is needed. (With standard concrete, the high alkalinity protects the steel re-bar from corrosion.)

In addition to the huge benefit of sequestering carbon dioxide emitted from power plants, CarbonMix cement and aggregate production could provide a way to demineralize water. Such a facility would provide a wonderful complement to a desalination plant, for example.

In desalination, fresh water is extracted from seawater or brine in a process that concentrates the calcium and other minerals. Desalination is becoming more and more common, and getting rid of the highly concentrated brine can be a challenge. Texas, for example, has almost 50 desalination plants, nearly all of them using brine rather than seawater.

Reducing the mineral content of brine is also a key priority in fracking. The oil and gas industry would love to find someone wanting to use that brine, helping to purify it in the process.

It remains to be seen whether Brent Constantz can realize his vision of transforming cement and concrete—among the most common materials used in construction today. If he can, it will be a game changer—something that attendees of BuildWell were quick to grasp. If he succeeds, fortunes will be made in the process and the world will be far better for it. I look forward to watching the progress of Blue Planet over the coming months and years. BuildingGreen will be reporting on this technology as it evolves.

(2014, March 26). Can This Man Reinvent Concrete?. Retrieved from https://www.buildinggreen.com/blog/can-man-reinvent-concrete 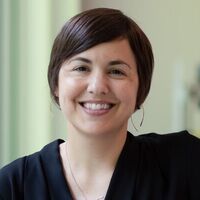 How have the offerings of Blue Planet been evolving in the past few years?  It looks like the now have a website, but that their focus is more specifically on calcium carbonate as aggregate than the alternative to traditional Portland Cement?