In 2003, as part of their presentation (“Ventilation Myths and Misconceptions”) at the Affordable Comfort conference, Collin Olson and Paul Francisco debuted a software tool they developed called SEE STACK. (If you want to experiment with the software, you can safely click here to download the virus-free executable file and training manual from The Energy Conservatory).

The SEE STACK software shows what happens to the pressure profile of a building as the delta-T (difference between indoor and outdoor temperature) changes and as mechanical ventilation — supply or exhaust — is introduced to small buildings. 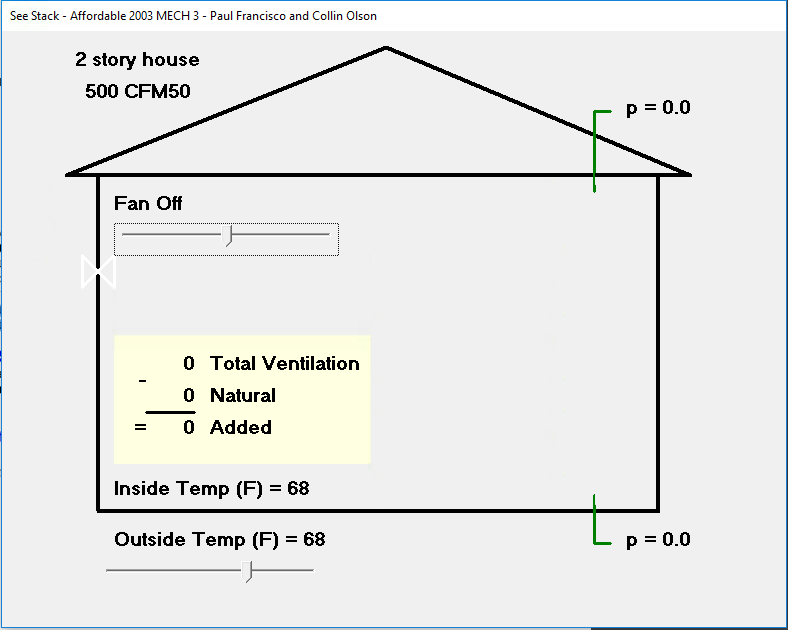 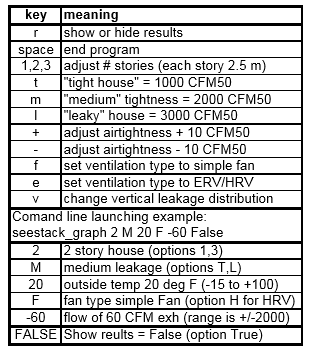 This table is the keystroke legend for making changes to SEE STACK.

If at this point you have downloaded and opened both the SEE STACK executable file and the training manual, you can see what a great educational resource it is. But what about using it in the field?

The ceiling is dripping

In 2014, I got a call from central Connecticut for a leaking cathedral ceiling and kneewall attic space. 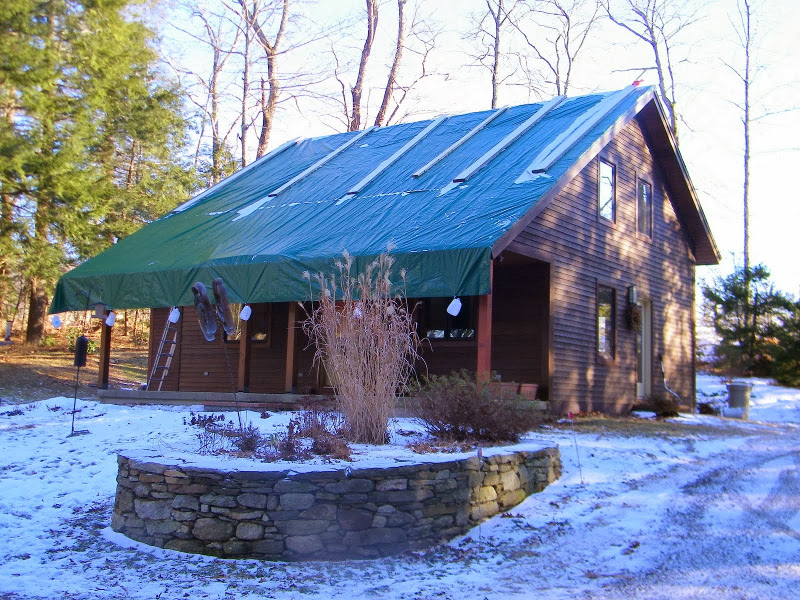 The timber-frame house in Connecticut is insulated with structural insulated panels (SIPs). Moisture is condensing and dripping from the home's roof assembly.

Enclosure details for this story-and-a-half house (28 feet by 32 feet):

In the winter, water was leaking between the tongue-and-groove exposed roof deck boards and into the kneewall attic space. 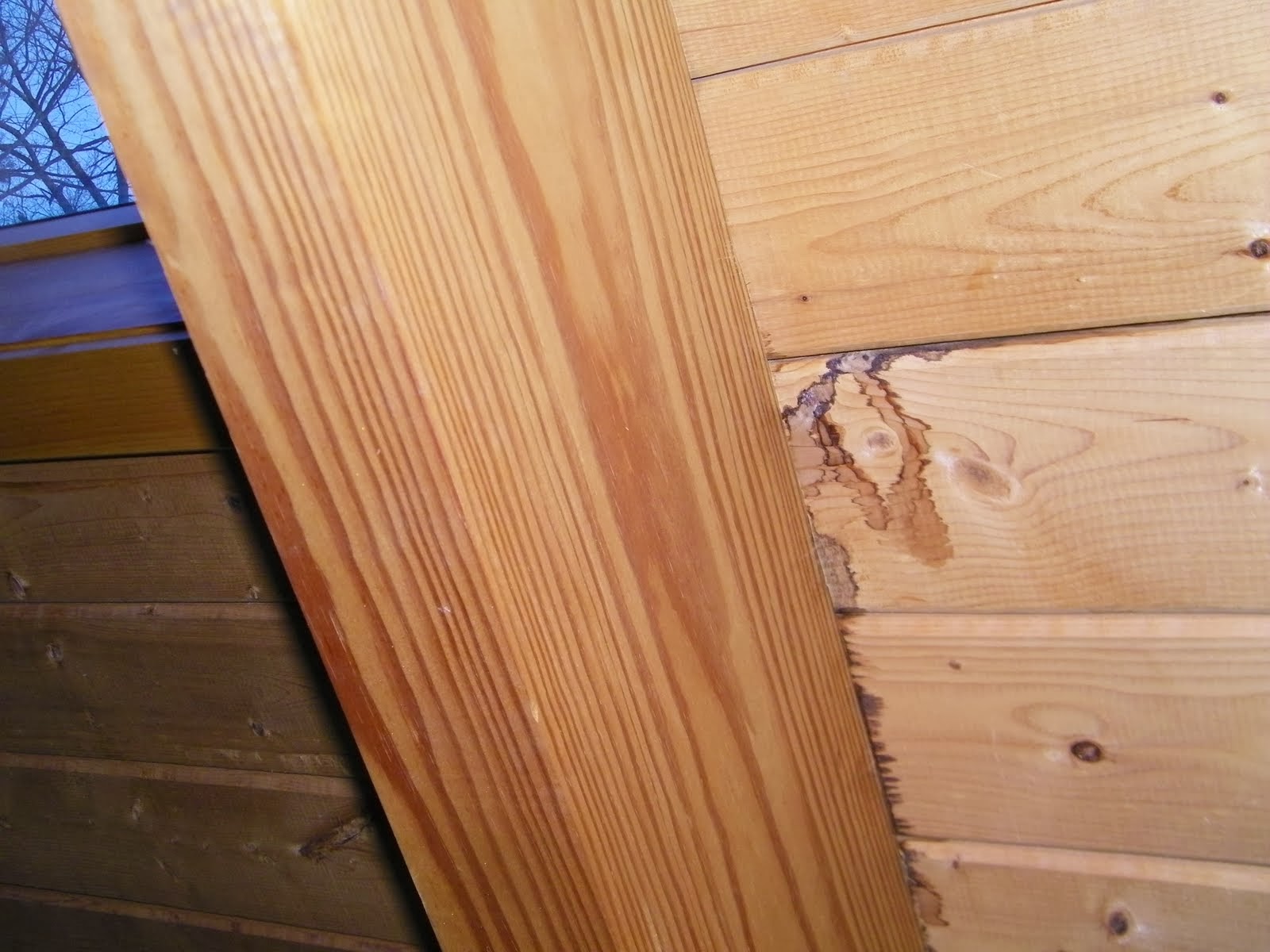 Note the water staining along the rafter and between the tongue-and-groove boards. 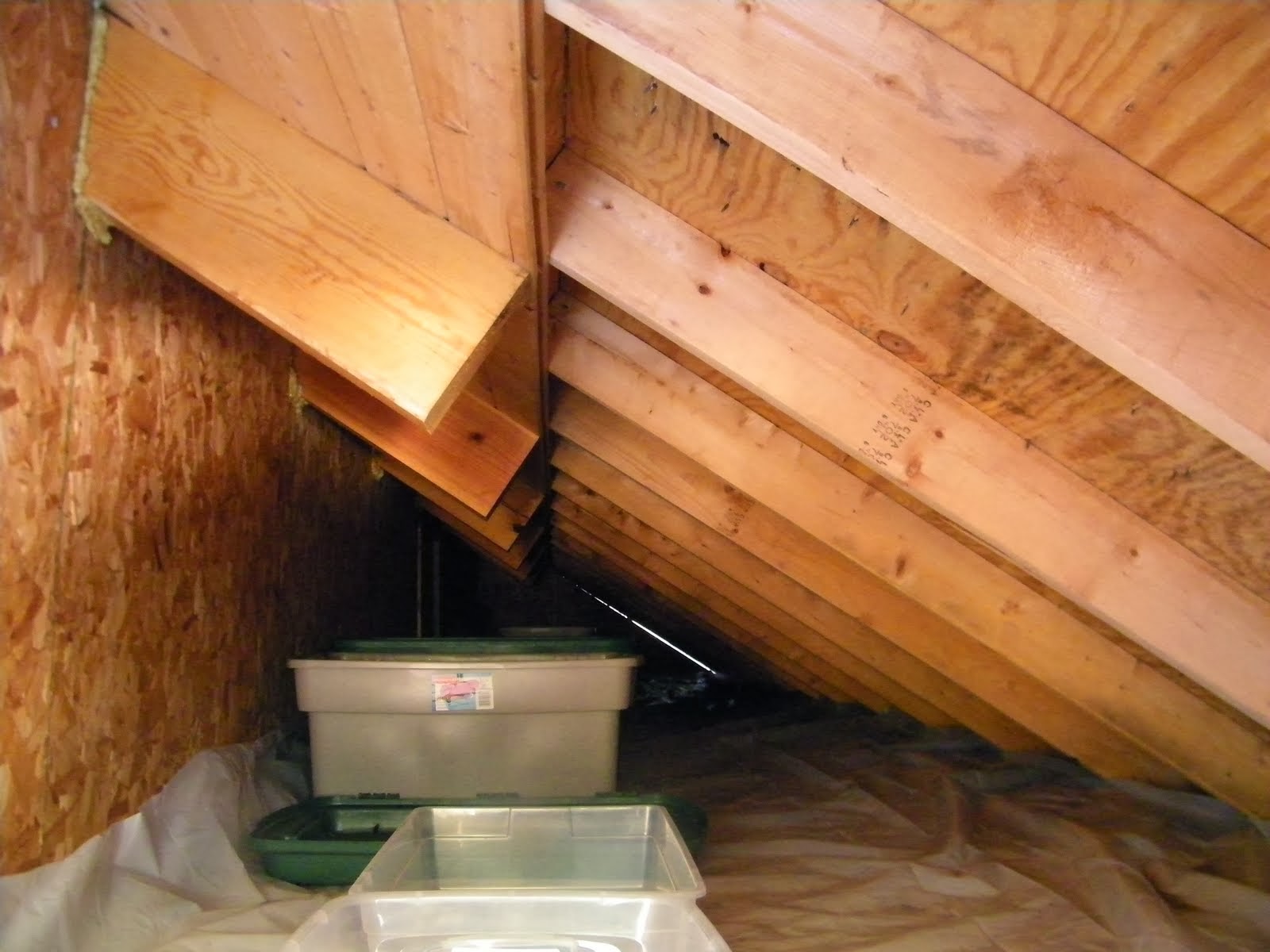 On the north side of this story-and-a-half cape, the roof is extended for a front porch facing the lake, resulting in this kneewall attic space. The attic is experiencing significant water leakage off the eaves of the timber-frame roof.

This sure looked to me as though warm moist air was leaking up into the SIP roof deck, driven by wintertime stack effect, and then condensing and running along the 6-mil poly, leaking through holes back into the cathedral ceiling but also running down the poly to where the poly terminates in the attic knee wall space.

An infrared camera (operated while a blower door is depressurizing the building) shows air leaks along the timber-frame rafters, right where the SIP joints are, exterior to the tongue-and-groove deck and 6-mil poly.

This blower-door-assisted infrared photo shows cold air leaking in at each of the tongue-and-groove roof deck boards as they extend out over the gable-end timber-frame rafter to form the gable overhang. When I got up on a ladder to the gable end roof line, there were places where you could actually see daylight along these cracks. 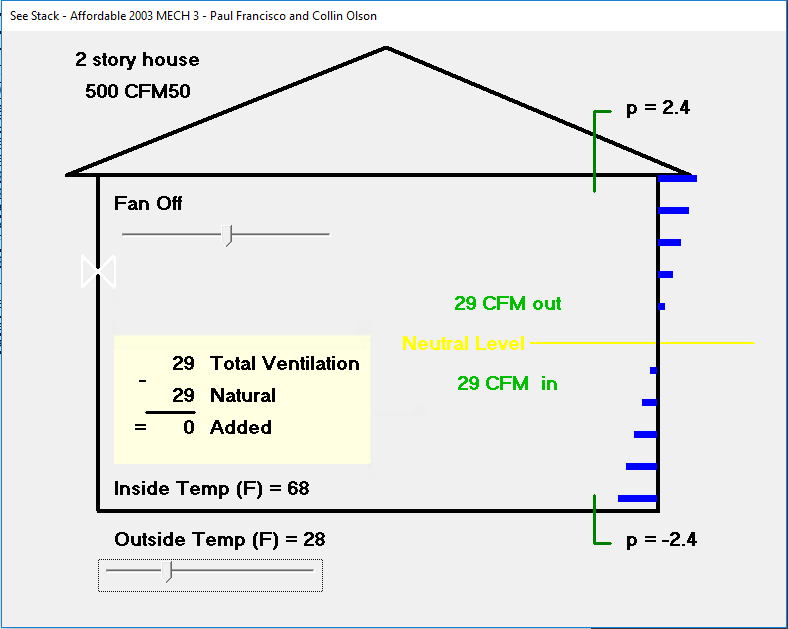 I picked a fairly common wintertime delta-T for central Connecticut (40 F°). SEE STACK shows a stack effect at the ceiling plane of positive 2.4 Pa. Note that I have set the airtightness for 500 cfm50, confirmed by a blower door test on the SIP timber-frame home. The blower door also revealed fairly evenly distributed air leaks, resulting in a setting for SEE STACK of evenly distributed air leaks along the vertical profile of the building. (I used the “v” keystroke from the SEE STACK legend above).

But why are these air leaks and the resulting condensation happening now, more than 25 years after the home was built? We confirmed that each SIP was installed with spray foam applied to butt joints as the panels were placed. We hypothesized that continual and cyclical contraction and expansion of the SIP finally resulted in hairline cracks in the spray foam in the butted panel joints.

The client balked: he had a pretty new roof and said, “Isn’t there another approach?” That is when I thought of SEE STACK: if the client could stomach the energy costs of an exhaust fan running in the winter to counter the stack effect, could we use SEE STACK to understand the pressure regimes that the home would experience over the winter and to help us correctly size the exhaust fan? 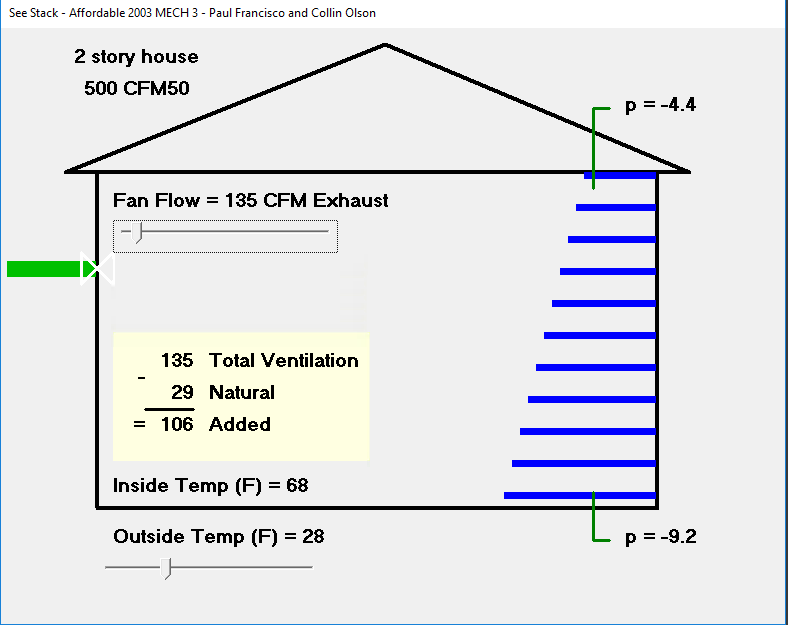 SEE STACK shows a reasonable pressure profile for the whole structure, including -4.4 Pa at the ceiling with a delta-T of 40 F° and a 135 cfm exhaust fan. The client chose a high-efficiency exhaust fan which could be set over a range of approximately 50 to 150 cfm.

So how did we and SEE STACK do? The tables below show that the client’s exhaust fan is altering the pressure profile the same way (or very nearly the same way) as SEE STACK predicted. For the last three years, the client has had no wintertime cathedral ceiling leakage. The client adjusts the exhaust fan based on approximate delta-T— higher fan settings when it is really cold and lower when it is not. (He only operates the fan during the heating season). 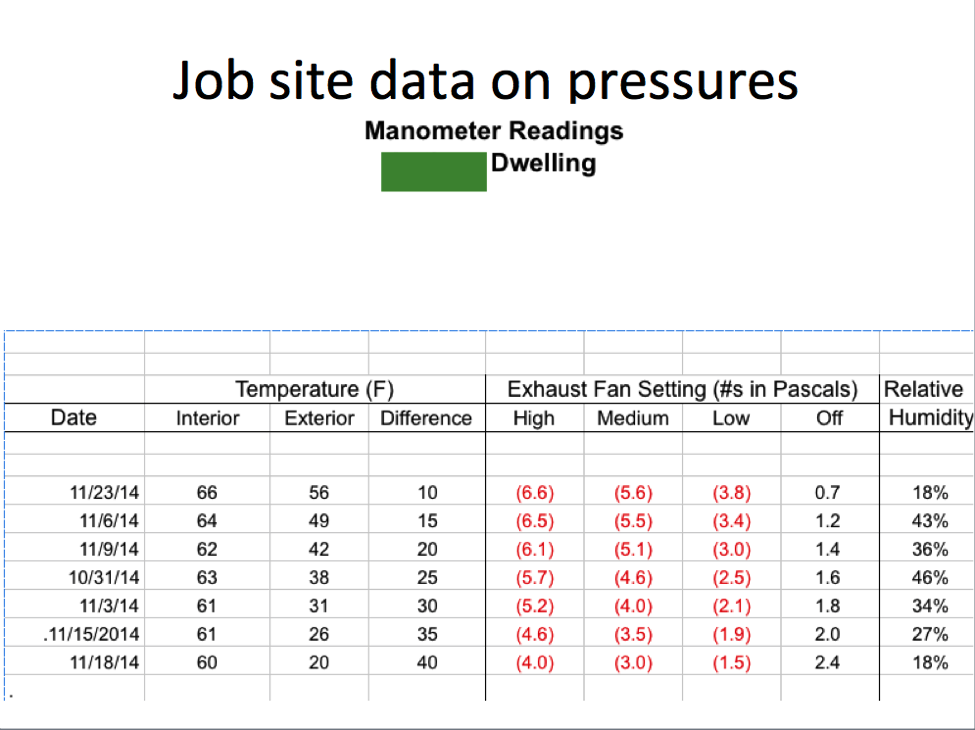 Note how the pressure reading shown in the of this table (+2.4 Pa) matches the SEE STACK calculation shown above (no exhaust fan and delta-T 40 F°) and how in the same row, the number corresponding to the column for high speed operation of the exhaust fan shows a pressure at the ceiling of -4.0 Pa, just a bit lower than the -4.4 Pa that SEE STACK calculated in the screen shot above. 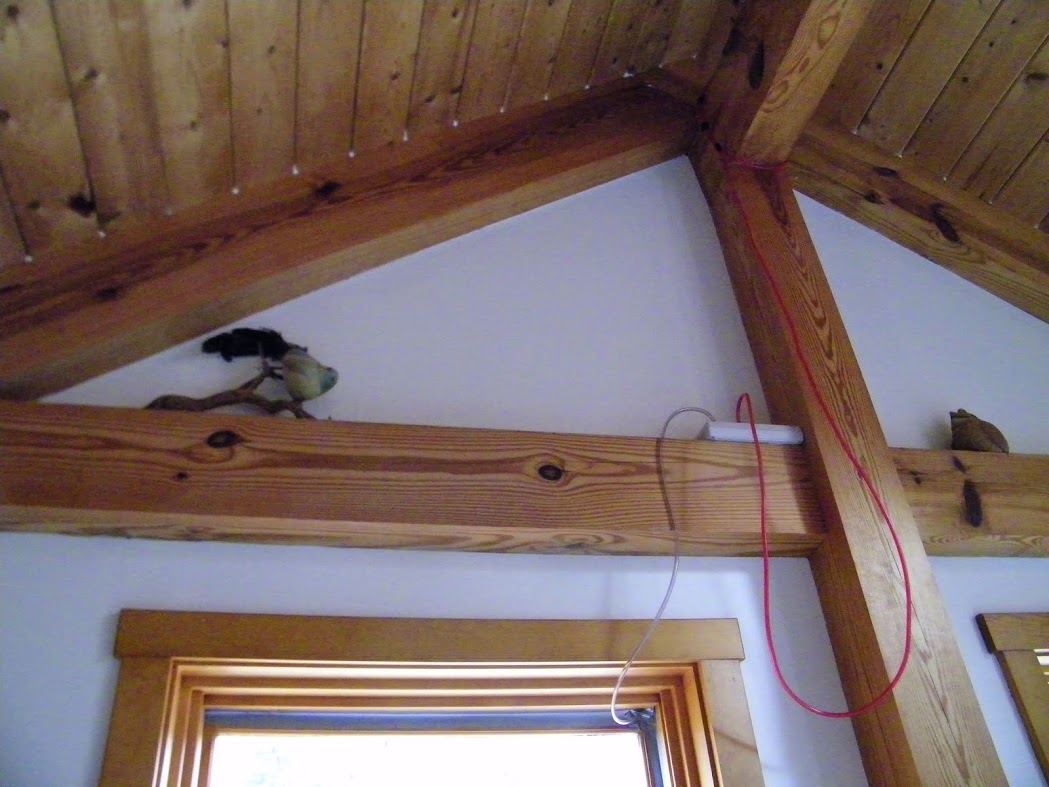 The pressure gauge setup that was used to get the data shown in the table above. Note the dots of spray foam used to seal the air leaks between the ceiling boards. 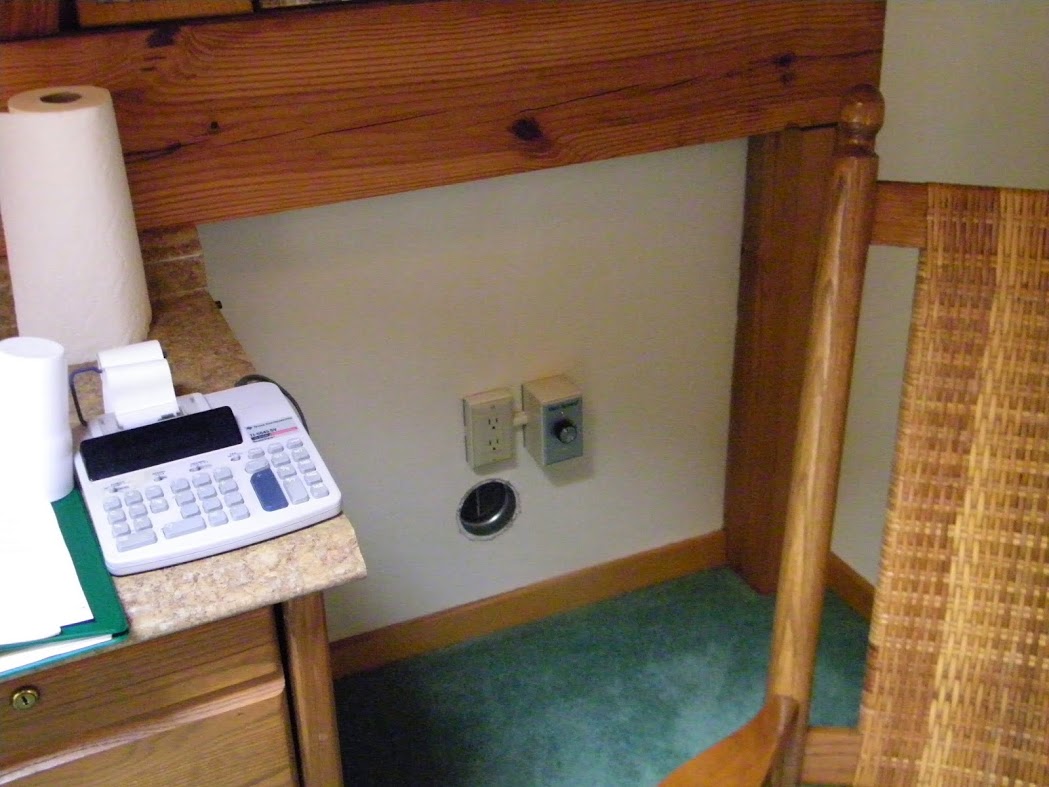 What other consequences are there when changing the pressure profile of this home with an exhaust fan? We considered two phenomena:

What about bigger commercial buildings?

Sorry to say that SEE STACK only works for smaller residential buildings. For larger commercial buildings, you need to use the program CONTAM, a multizone indoor air quality and ventilation analysis computer program designed by the National Institute for Standards and Technology (NIST). You can download CONTAM here: http://www.bfrl.nist.gov/IAQanalysis/software/index.htm.

A postscript from Collin Olson, one of the two developers of SEE STACK: “The name 'See Stack' is descriptive of what the program does. It was also a nod to the show 'Land of the Lost' as well as the amazing 'Sea Stacks' of the Pacific Northwest near Seattle, where Larry Palmiter and Paul Francisco were at the time.”

Peter Yost is a principal and Vice President - Technical Services at BuildingGreen, working on the design, specification, construction and investigation of both residential and commercial buildings. Peter also teaches and trains building professionals across the country. Contact Pete here.